Ten years ago this afternoon, my sister-in-law was videotaping their tiny, struggling bodies through the glass window of the NICU. Today, I took pictures of my son Jacob and his friends rolling and throwing bowling balls down the alley lanes. His twin brother, Clint, was laughing nearby.

Clint could not see the game due to detached retinas. He could not participate due to severe cerebral palsy. But he could hear it, and he thought the sound of bowling balls was as "funny" as the black-powder cannon blasts at our town's annual Civil War battle reenactment! Just hearing his laughter made me realize how far even Clint has come! Loud or unusual noises once terrified him.

Ten years ago, the neonatologist had both babies listed in critical and unstable condition. He couldn't say if either would survive and warned us about the "roller coaster" ahead.

Today, Jacob is little but physically strong. As I write this, he is bouncing his basketball out in the driveway. His mind is bright and he "escaped" serious disabilities despite a Grade 4 IVH -- no shunt, no seizures, no eye-related problems, etc. He has common preemie problems such as hyperactivity, impulsiveness and social immaturity.

Today, Clint feels as good as he has felt in a long time -- even after just getting over a bout of strep throat. Through the years, he has survived many surgeries and illnesses. When he was a week old and undergoing surgery to repair a hole in his infected intestine, doctors gave him only a tiny chance to survive the operation. He already had been diagnosed with tons of other problems, including kidney failure and intraventricular hemorrhages. But Clint made it through. That's when we knew he was a real fighter!

They are both a challenge and a joy, and their parents are just thankful it is 10 years hence!

Janet Gresham is a former news editor and reporter. She now works at home near Selma, Alabama and is editor of Selma Showcase magazine 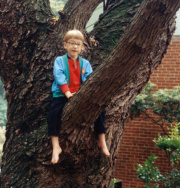